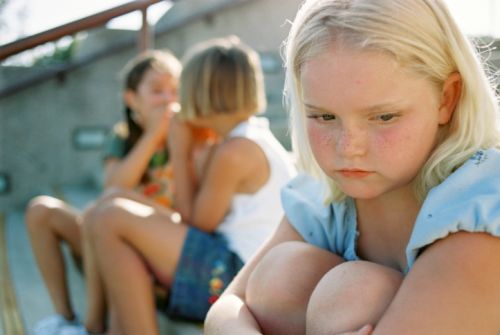 Posted at 15:42h in Emotions, Kids, Psychosomatic by Real Way of Life

The following study was conceived, designed and carried out by Real Way of Life. Its objective was to measure the emotional impact of an event of social exclusion (a child is not invited to play ball by two other peers) assessing both emotional and mental reactions on a qualitative (witnessing, interviewing) and a quantitative level (using some biomarkers such as salivary cortisol, heartbeat, cardiac coherence, etc.) and evaluate the most efficient ones as well as the level of impact of each one.

While waiting for the report the complete research conducted by Real Way of Life, following is a brief, concise presentation of this study. If you want to be updated about the release of the final document, the congress and the next studies, leave your name and email address using the form at the bottom of this page.

We chose 732 children. They were divided into three equal groups of 244. The sample was equally sorted by gender – male and female, and by nationality – British and Italian (183 British boys, 183 Italian boys, 183 British girls and 183 Italian girls.) Groups were mixed, only girls or only boys. Age was between 8 and 14.

We noticed qualitative (interviews to children and witnessing professionals observing behaviours and emotional and relational dynamics) and quantitative (heartbeat, cardiac coherence, salivary cortisol types of brain waves etc.) indicators of stress. We opted for a non invasive analysis using tools which children could wear without being aware of them (a wireless, ultra light EEG helmet, a ultra light detector of heartbeat and cardiac coherence etc.) Both qualitative and quantitative analysis were performed by professionals who were trained with filmed samples.

Description of the Experiment – Step 1

All children were asked to play ball.

Half Sample – Alfa. Two children were secretly told to gradually exclude the third one from the game (the subject was less and less involved in the game, until he no longer received the ball.)

Half Sample – Beta. All three children were publicly taught to gradually exclude one of them from the game. They were expressly told it was a fake for the experiment. 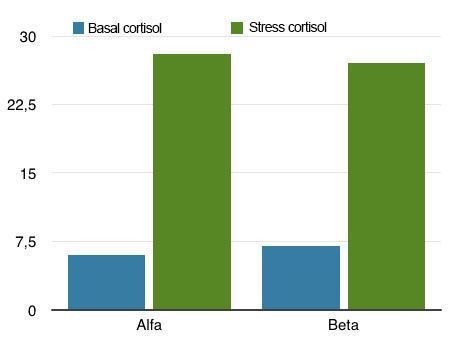 The social exclusion, either real (Alfa) or fake (Beta), caused the same levels of stress.

Records taken by observers were collated by a group of professionals that had nothing to do with the experiment, not even knowing if data were pertaining the Alfa or Beta groups.

From the quantitative point of view, values of cortisol (also known as the stress hormone) had no statistically relevant differences in the Alfa and Beta groups. The types of brain waves and heartbeat generated similar results in 90% of cases. The only difference could be found in the starting time: compared with the Alfa group, stress signals in the Beta group showed up with an average two minute delay.

Description of the Experiment – Step 2

Once they finished playing, the excluded children were offered different reaction forms by adults. The goal was to pinpoint immediate and long term reactions in the children. Proposed behaviours were: indifference, emotional relief, distraction, physical contact, goading them on being superior, playing down excluded children, reflecting on the value of children in other contexts, an intervention to force the two children to include the third in the next game. 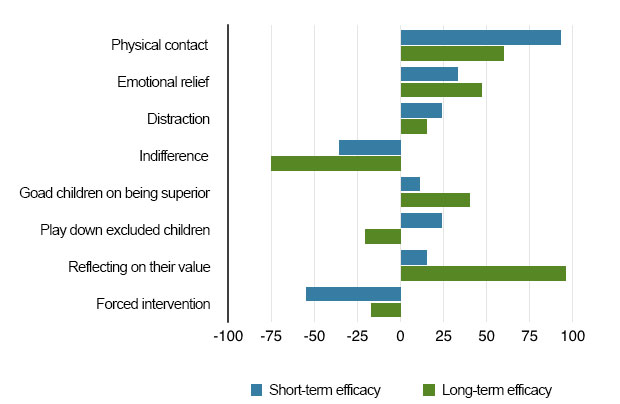 In the short term, children mostly found relief in physical contact, which allowed them to curb their emotions and quickly recovering a positive and constructive vision. Physical contact is an ancestral form of communication shared by all mammals. This is why it is so effective and quick and able to bypass every word in very little time.

In the long term, reflecting on one’s value in other contexts was more effective. This gave children the opportunity to differentiate between the immediate sense of frustration and the overall value of themselves as a person.

Both the intervention of an adult with the two other children and indifference were experienced more as detrimental than useful.

This study demonstrates that emotions “do not play or pretend”. Even when pretending something is negative, body and mind activate their biochemical correlates. This leads us to re-evaluate the weight of jokes, of games playing the same role over and over, people imitating or simulating a non real behaviour (for instance being sad) to have an advantage etc. it is essential to break these mechanisms and patterns in most cases, in order to avoid body and mind reactions which could be harmful for the establishing of an identity, one’s relational skills and the development of emotional automatisms.

On the other hand, this study clearly shows that a lot can be done with only our behaviour. If emotions genuinely react with stimuli we know are false, we can be more sure of ourselves, as confident people are, by simply adopting their non-verbal behaviour. On this last topic, we conducted another interesting research. We say that assuming a specific seven-step posture pattern for only a few minutes a day for a month, brings remarkable changes in personal confidence, with meaningful changes in the testosterone and cortisol levels. You can read the article here.

Are you interest in learning a solid framework to work this way with emotions? Check the program of our  The 8-step Protocol for Emotion, an online course full of practical tools and useful strategies. It’s an high value educational program with instant access and full support. Get all the informations you need.