The most complete breathing technique for stress, anxiety and trauma | Real Way of Life

14 Jan The most complete breathing technique for stress, anxiety and trauma

Posted at 15:02h in Emotions, Psychosomatic, Traumas by Real Way of Life

Feeling disoriented, a fuzzy head, shaking limbs (hands shaking and legs that give way) are all symptoms that relate to a lack of oxygen to the brain and muscles. These need to work effectively to activate the fight-or-flight responses required in dangerous conditions.

It is not by chance that controlled breathing techniques play a key role in helping people recover from early-stage anxiety and panic attacks.

Breathing should flow attuned with every human activity, adapting to the requirements of the activity and favouring physiological state as much as possible. Occasionally, however, something goes wrong and the lack of suitable breathing rhythm can pose a problem to cognitive and emotional processes.

There are various situations in which breathing can become dysfunctional: a fright or intense pain can stop it; there are also forced immobility situations – such as when you remain frozen during an accident or under physical attack or when being abused in some way – that lead to an incongruency between breathing and thorax and diaphragm mobility. Less dramatic instances, such as that of prolonged bad posture or non-physiological work conditions, can alter normal breathing flows too.

All these phenomena, if prolonged or repeated over time, can set off a series of dysfunctions and significant alterations at structural and functional level. This can have a significant impact on memory processes, dissociative episodes, on physiology and muscular memory, on hyperactivation of certain brain areas such as the amygdala and of entire brain networks as well as on the balance between ortho- and parasympathetic system.

With regards to this latter aspect (ortho-parasympathetic balance) it is important to remember that the view that pits sympathetic and parasympathetic systems against each other as mutually exclusive antagonists is limiting and dated. It is useful to talk about predominance of one system over the other in different contexts such as at the opposite poles of fight-flight and rest. Nevertheless, both systems interact and cooperate towards a common outcome of maximum flexibility and adaptation at any one time. 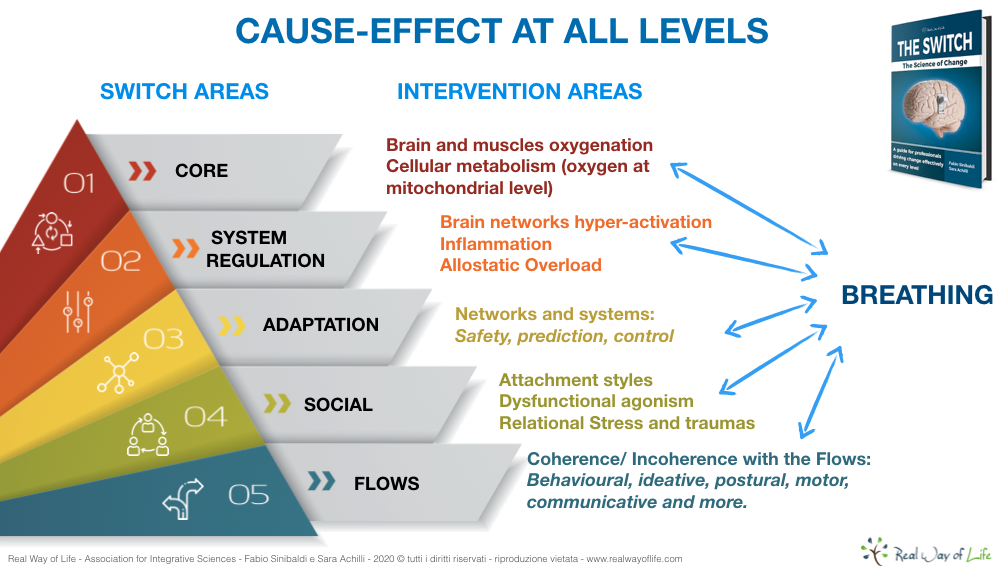 Problems arise when this dialogue and balance is not attuned with real requirements – this can happen in ambiguous or murky situations, or because dysfunctional systems for evaluating external and internal conditions have taken hold. On the other hand, there are also small constant physiological variations to this balance that are influenced by the regular alternation of inhaling and exhaling. As a result, controlled breathing techniques can be very effective especially when associated or put into conflict with coherent muscular activation states or other processes of active or recovered adaptation.

Working in a targeted way with the breathing system, movement, the alternation of opposite cycles and other aspects, allows us to stimulate and interact with stress responses and, in particular, with the dialogue and the balance between sympathetic and parasympathetic nervous systems.

Very strong pain or unexpected emotion such as astonishment can stop breathing in its tracks. If the stall is prolonged and combined with muscular stiffening or immobilisation, a series of complications may occur at the level of the writing of our memories. At the central level, the memories or the event are filed separately so that the narration can be connected to images, sounds or sensations. This creates those effects that are well-illustrated by veterans in war movies: black-and-white silent dreams, that are nevertheless very distressing; or strong emotions associated to noises, but with no historical or temporal reference.

The basic concept of this technique is that there are two main alternating cycles:

NB: the main steps of this technique follow. To understand it fully, however, a video is worth more than a thousand words!

➜ a FREE VIDEO COURSE illustrating all further phases and 5 other variants is available. You can access it free of charge on our website.

Start seated. The back is well against the chair, legs at 90 degrees and hands resting comfortably on the legs.

The head is centered comfortably on the shoulders, in a relaxed, natural position.

1) The first step is to inhale while slowly tilting the head back. This movement is quite slow, as if in slow motion.

In this first instance, most people end the movement before they finish inhaling. For now, that is fine. Remember: we can improve the technique as we go along.

Ask the person to hold the position and finish inhaling by filling their lungs, a movement which pushes down the diaphragm.

It should be a deep breath, but one that stays within physiology. We do not want to “fill the lungs as much as we can” but to breathe “in the best way possible”.

When the inhalation terminates, we ask the person to hold that position, count two seconds and then proceed with the following step.

2) Now the head returns to the center and we exhale. As per the previous iteration we complete the exhalation holding the head in a vertical position.

The principle stays the same: “let’s empty the lungs well” but “not entirely”. The idea is to go a bit further than we would do naturally, but to stop before it becomes too difficult, distressing, or forced. We will work within a re-consolidation window, which is essential in generating change and new learning.

Initially, when the head is in the vertical position, it is important to remember that it must be straight, but also relaxed. This is in order to avoid recruiting unnecessary muscles that could lead to a stiffening of the neck.

Once the exhalation is completed, we count two seconds and proceed with the third step.

3) Now the head tips forward. Here slowness is essential, because the movement is short and the back muscles that we are stretching could be quite contracted. We are aiming to stretch them a little, but always remaining in physiology.

Please note that the stretching of the muscles and greater freedom of movement can and must only be an indirect consequence of this exercise.  We are not actively seeking that out during its execution.

Once the inhalation is completed, we pause for two seconds, 4) then while exhaling, we return the head to centre.

5) At this point there is a crucial step: I do the following breath, but remaining with the head still.  In this case I finished the previous movement exhaling, thus I remain still while I inhale.

We then start again moving the head in reversal of the previous breathing step.

6) This time, we slowly tilt the head backwards while exhaling (whereas in the previous cycle we were inhaling).

Then we release, pause and 7) slowly take the head back to a central position while inhaling.

8) Now we tip the head forward while exhaling and9) we end by returning to a central position while inhaling.

10) We now keep our head in a central position while exhaling.

We have now completed two cycles, the first starting by inhaling, the second by exhaling.  We can now start over again.