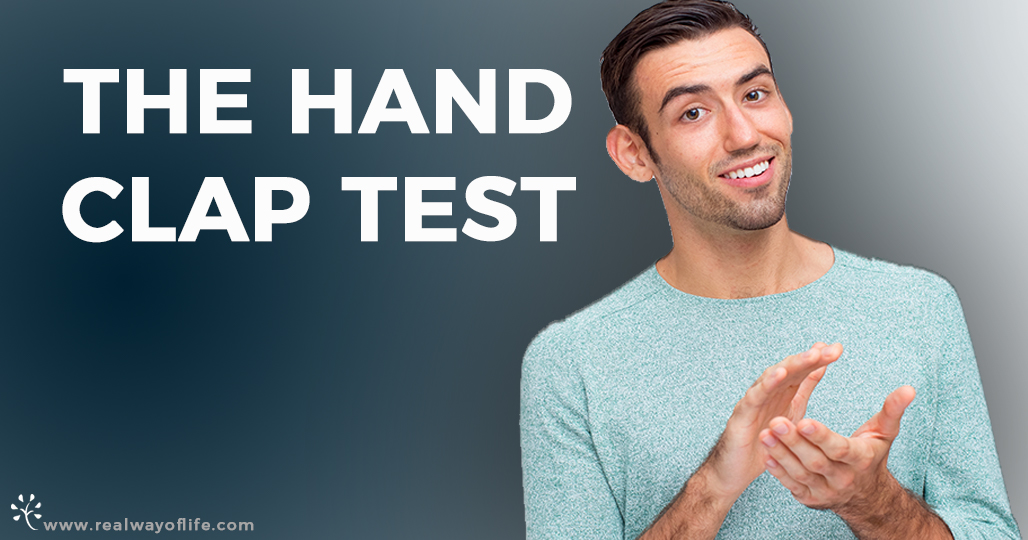 TRY PUTTING YOUR HANDS TOGETHER

As though you were clapping.

The only difference is that when your hands touch, I’ll ask you to hold that position.

This is an interesting test, that we’ve developed and refined over the years. Personally, I use it frequently both in individual sessions and in training courses.

In fact, it allows us to focus on a series of aspects experientially and pragmatically.

I’ll say no more for the time being to avoid influencing results.

Ok, now do it again and try to make a better sound.

Now let’s attempt the opposite: clap your hands trying to make the worst possible sound.

This time too you can experiment and try it out more than once.

Ok. Here we are. Have you made your various attempts?

What differences did you notice?

Most people, not to say everyone, react to the two variants in very different ways.

When they are trying to make a better sound they immediately engage in a series of attempts. You too probably tried changing the position of your hands, the way you moved and the energy you put into clapping.

Unless you studied physical acoustics, or you are a professional percussionist, your attempts were unlikely to follow a specific strategy. And yet you tried anyway, and some interesting results emerged nonetheless.

By contrast, when it comes to making an uglier sound, most people are puzzled. At first, they are not sure how to achieve this and make a few, tentative attempts.

Does this roughly sum up how it went for you too?

This test teaches various lessons and provides food for thought that range from:

Let’s analyse these one by one as follows:

1. TENDENCY TOWARDS IMPROVEMENT AND EVOLUTION

The first thing that is highlighted is the different reaction that we have to a request for improvement (to make a better sound) and a request to worsen (make a worse sound).

Most people tend to easily try to make an improvement even if they are unsure of how to achieve the outcome. By contrast, they find it difficult to make a change in the opposite direction and worsen the activity.

It’s easy to interpret this experience in an evolutionary and neurobiological key looking at aspects at the core of our adaptation and development system.

We are programmed and we’ve evolved to move forward.

In basic terms this means living and surviving. At a more complex and higher level it means increasing possibilities, quality and alternatives.

This is also evident at a motor level looking at walking: we have innate mechanisms to walk forwards, but not backwards. It’s not just a structural feature, but a core neurobiological asset.

When we start walking we activate these innate mechanisms, but we need to exercise them with care and explorative curiosity.

This also happens in language learning where the cognitive element is more relevant although continuing to involve relational, hearing and motor elements.

Once we reach a certain level of experience, we start talking about automatism. If automatism is dysfunctional then it will be all the harder to change.

Fortunately understanding these systems allows us to use them to our advantage.  This can be achieved in many ways: acting specifically on the single elements at play, changing perceptive thresholds, giving the neural system back its tendency towards plasticity and much more.

It’s also important to understand the people that don’t even try to work for an improvement, right from the start.

These are often situations where impotence is acquired, or rather in which – further to a series of frustrations and the impossibility to change a specific reality- the conviction that they are unable to influence the world outside has extended to every aspect.

Obviously, there are also independent and synergistic factors, such as alterations to alertness systems and neural networks further to trauma or chronic stress, inflammatory states of various nature and much more.

FROM BLOCKAGE TO EVOLUTION

Let’s go back to our example and the difficulties associated with making an uglier sound or, by analogy, with walking backwards.

Neither of the two instances is a predictable option because they have no evolutionary basis.

However, experiencing these models can have various advantages.

The first is that, there being no predisposition and established habit, it will be easier to reactivate attention, control and awareness. It is not by chance that in post-surgery rehabilitation or with patients with Parkinson’s disease, it is easier to exercise using new rather than habitual movements such as backwards walking.

As we anticipated it’s not just necessary to work on recovery of the natural evolutionary tendency, but also to act on neurobiological integration, which is at the core of physical and mental health.

2. A WINDOW ON LATERALISATION AND HEMISPHERICAL CONNECTIONS

When we take the hand clapping test we are able to explore a number of areas. For example, the left hand resting on the right or vice-versa clearly denotes hemispherical lateralisation.

This article cannot delve into all the details, but I suggest you visit  > other videos and articles on our blog which provide more insight into false myths and scientific fact regarding right and left hemisphere, limbic system and other brain networks that are fundamental to our adaptation, development and recovery systems.

At this point I’ll simply anticipate that it is critical to keep abreast of recent research showing that today the distinction between right ‘creative’ side of the brain, and left ‘logical side, or even between three different types of brain (reptile, mammal and human) require revision and expansion in light of new information.

3. INTEGRATION, AWARENESS AND SELF IMAGE

Another aspect we can analyse via the simple hand clapping gesture, maybe by repeating it more than once to produce different sounds regards the sensory aspect.

This information is integrated in the insula which, as Bud Craig first accurately demonstrated, plays a key role in adaptation, self-regulation, self-image and development processes.

This is why techniques that actively use movement, slow muscular and isometric contractions, their contrasting or combined combination with breathing phases and mental or emotional systems, can have a huge impact in change, care or development processes.

You can freely try out some of these techniques here: